The French Revolution is a significant part of modern European history. It impacted the political scenario and the country's social and economic conditions.

The incident also removed the traditional Feudal system and monarchy. The unfavorable economic decisions taken by King Louis XIV enraged the citizens. The French Revolution indicated the power of citizens who would overthrow the Government. Though the aims with which the revolution started failed, it contributed to the history of Europe. The French Revolution began in 1789 and went on till 1799. Thus, making the French revolution timeline a complicated one.

The fire of the French Revolution was ignited after the Estates-General Meet in May-June of 1789. The storming of Bastille in July 1789 followed the same. In August of the same year, there came the Declaration of Rights of Man and the Citizen. The Women's March to Versailles followed it. The condition culminated with the execution of Louis XIV in January 1793. The incident led to the Reign of Terror.

The Marie Antoinette execution happened in October of 1793. Robespierre's killing took place in 1974. The revolution took multiple turns as many participants found their agenda failing. The stability returned after Napoleon took power in 1799.

How to make a French Revolution timeline in EdrawMax Online?

​Creating a French Revolution Timeline diagram in EdrawMax Online is pretty simple. The free Timeline Diagrams maker has several features as you can instantly import the images or icons from your system or Google Drive or DropBox. The Timeline Diagram maker lets you import the data right from the .csv file, or you can also import media content, like images, icons, or symbols, right from your Google Drive or DropBox.

Customize your French Revolution timeline diagram by changing the color or by adding more relevant data. Based on your research, you can also add or remove the data accordingly. Since it is about product planning, you can add more relevant data about different products and include their lifecycle.

During the French Revolution, the economic and social conditions of the country also changed. To make the timeline informative, the user can also mention those socio-economic scenarios. 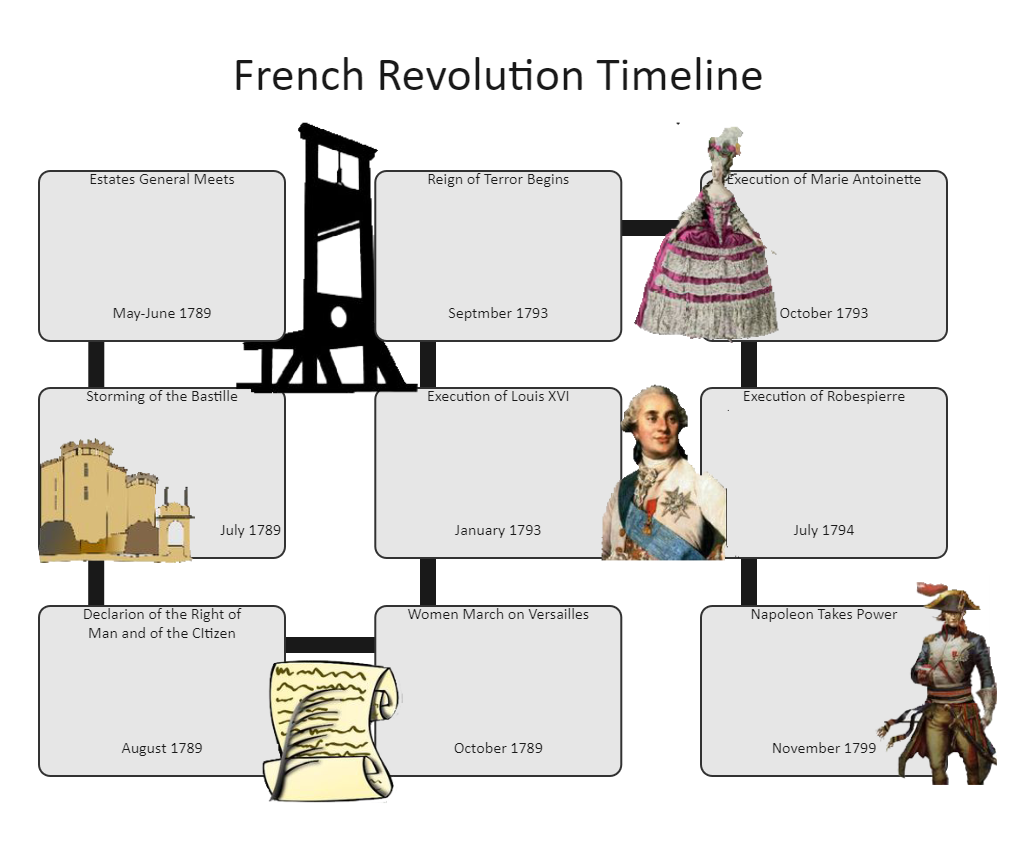