The legend of Zelda is a fantasy, action-based game franchisee created by two renowned Japanese game designers Shigeru Miyamoto and Takashi Tezuka. The game series, owned and published by Nintendo in the 1980s and since then, this action-packed game series has attracted and entertained millions of game lovers.

The Legend of Zelda timeline is a schematic representation of the fictional chronology of the endless battles between the positive and negative forces of the Universe. Here the main protagonist is a courageous young man called Link, and the princess Zelda, who is supposed to be a reincarnation of Goddess Hylia. They are engaged in an endless battle with the antagonist Ganon or Ganondorf to save the sacred kingdom called Hyrule.

Understand the Legend of Zelda Timeline

Those who are keen on the game that represents the endless battle between the good and evil forces of nature would undoubtedly look for the Legend of Zelda timeline, which was a fictional chronological order of the war that took place between various reincarnations of Link and Zelda on one side representing the good, and Ganon or Ganondorf who represents evil.

The Legend of Zelda timeline was based on the story of the medieval world, where there were various kingdoms and trade units, and through the timeline, the game lovers get to know the chronology of the series.

How to Create a Legend of Zelda Timeline Diagram EdrawMax Online?

Creating a Legend of Zelda Timeline diagram in EdrawMax Online is pretty simple. The free Timeline Diagrams maker has several features as you can instantly import the images or icons from your system or Google Drive or DropBox. The Timeline Diagram maker lets you import the data right from the .csv file, or you can also import media content, like images, icons, or symbols, right from your Google Drive or DropBox.

For all enthusiasts of the game of the legend of Zelda, it is imperative to have some idea of the chronological order in which various reincarnation of Link and Princess Zelda fights with Demon King Ganon. The Legend of Zelda timeline was created as early as 2003, but it was confidential till the master timeline publication by Nintendo in the year 2011. Before you create a timeline on your own, you should do some homework to chronologically show the battle that happened first and the other sequences of the game. The fantastical happenings lead to a series of endless wars between good and evil.

Customize your Legend of Zelda timeline diagram by changing the color or by adding more relevant data. Based on your research, you can also add or remove the data accordingly. Since it is about product planning, you can add more relevant data about different products and include their lifecycle.

As the game enthusiasts create their Legend of Zelda timeline, they should make a concise study of the sequence of events in the series.

All war is related. As a result, the game enthusiasts should have a clear idea of the chronology of different battles between the various reincarnations of Link, Princess Zelda, and the evil lord Ganon.

The game series called Legend of Zelda, created by Japanese company Nintendo, has become very popular around the globe, attracting millions of game enthusiasts. The legend of Zelda's timeline is a schematic representation of the fictional chronological order as the game unfolds in the magical and secret kingdom of Hyrule. However, creating one such time can be tedious. Thus, seeking help from tools such as EdrawMax Online can be impactful. They come with around 270 templates, thus, making your work smoother.
Tag
timeline
Share
Report
0
329 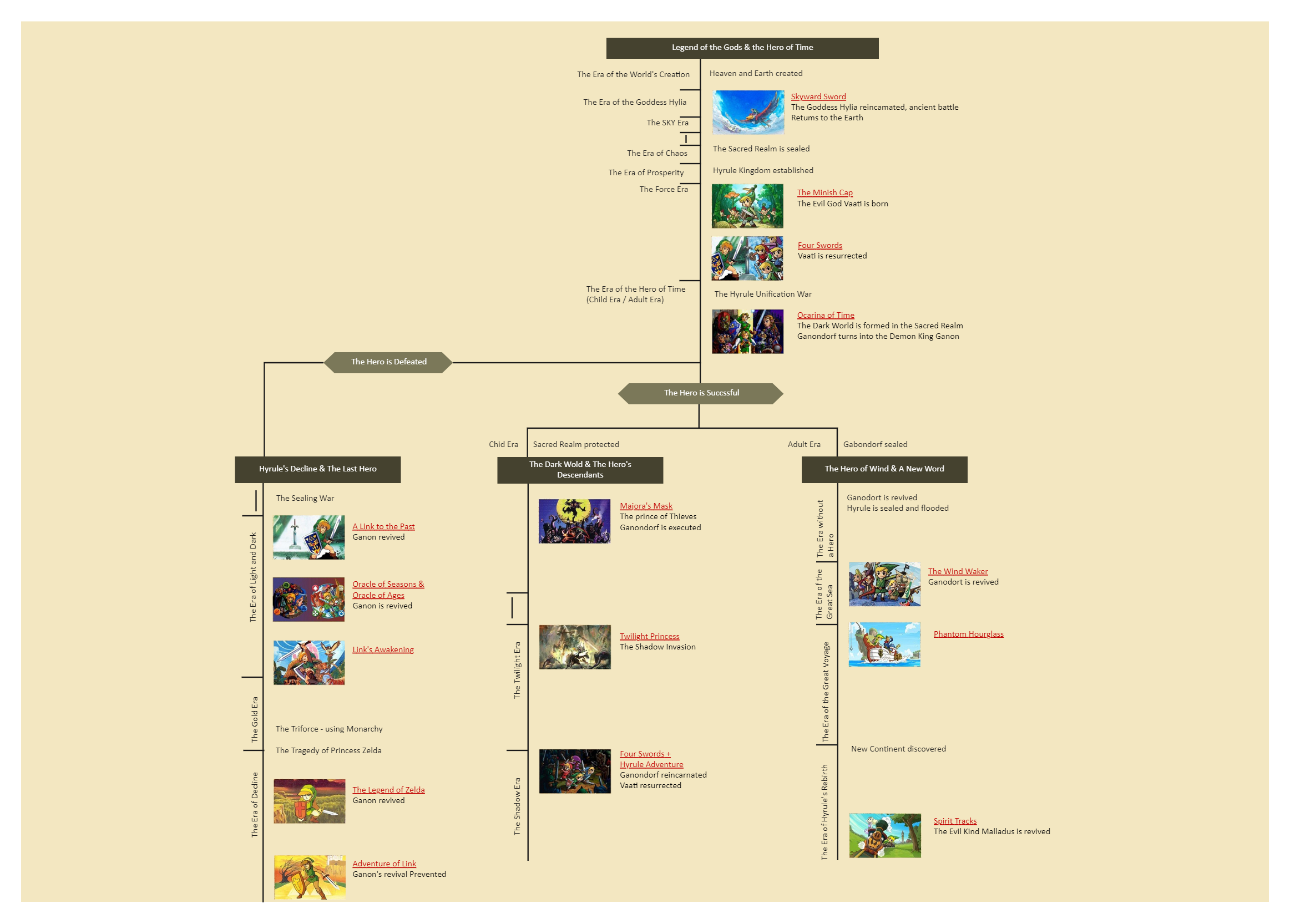