Japanese Electronics company Nintendo has already developed multiple variations of consoles for their video game. Starting from the Nintendo Entertainment System, the company has released several home video game consoles and portable ones. The contribution of the company to modern gaming history is remarkable as they have changed the market conditions. As soon as a console starts getting old, they come back with something new and exciting for the gamers. They have developed multiple consoles that support a Nintendo console timeline.

Nintendo first marketed its gaming console in Japan, and later they launched it in America and other Western countries, officially as Nintendo Entertainment System. In 1989, they launched a modified version named Gameboy, followed by Super Nintendo in 1990.

How to Create a Nintendo Consoles Timeline Diagram EdrawMax Online?

Creating a Nintendo Consoles Timeline diagram in EdrawMax Online is pretty simple. The free Timeline Diagrams maker has several features as you can instantly import the images or icons from your system or Google Drive or DropBox. The Timeline Diagram maker lets you import the data right from the .csv file, or you can also import media content, like images, icons, or symbols, right from your Google Drive or DropBox.

Today Nintendo is a popular name in the gaming industry. However, the beginning was not pretty smooth. After Nintendo marketed the set in America after launching in Japan, it did not get a positive reception at the very beginning. The video game crash probably contributed to this. However, after it was marketed in New York in 1986, Nintendo earned its popularity. You can have this information in your Nintendo Console Timeline.

Customize your timeline diagram by changing the color or by adding more relevant data. Based on your research, you can also add or remove the data accordingly. Since it is about product planning, you can add more relevant data about different products and include their lifecycle.

Though the company has marketed many consoles, they have also launched some versions only in the domestic market of Japan. For example, they launched the very first Nintendo console as the Nintendo Entertainment System. It was initially launched in Japan in 1983 as Family Computer. Later in 1985, it was marketed in America, the UK, and Europe. Consider these facts while creating the Nintendo Console Timeline.

The Nintendo company has developed its gaming console over the years to get the modern version of it. Not only the Nintendo lovers but also the gamers worldwide wait for their new updates and console versions. Hence, while working on a Nintendo console’s timeline, people need to include all those variations. They must use EdrawMax online tool. It can help the user create a high-quality Nintendo console timeline with its templates and vector-based dashboard.
Creator 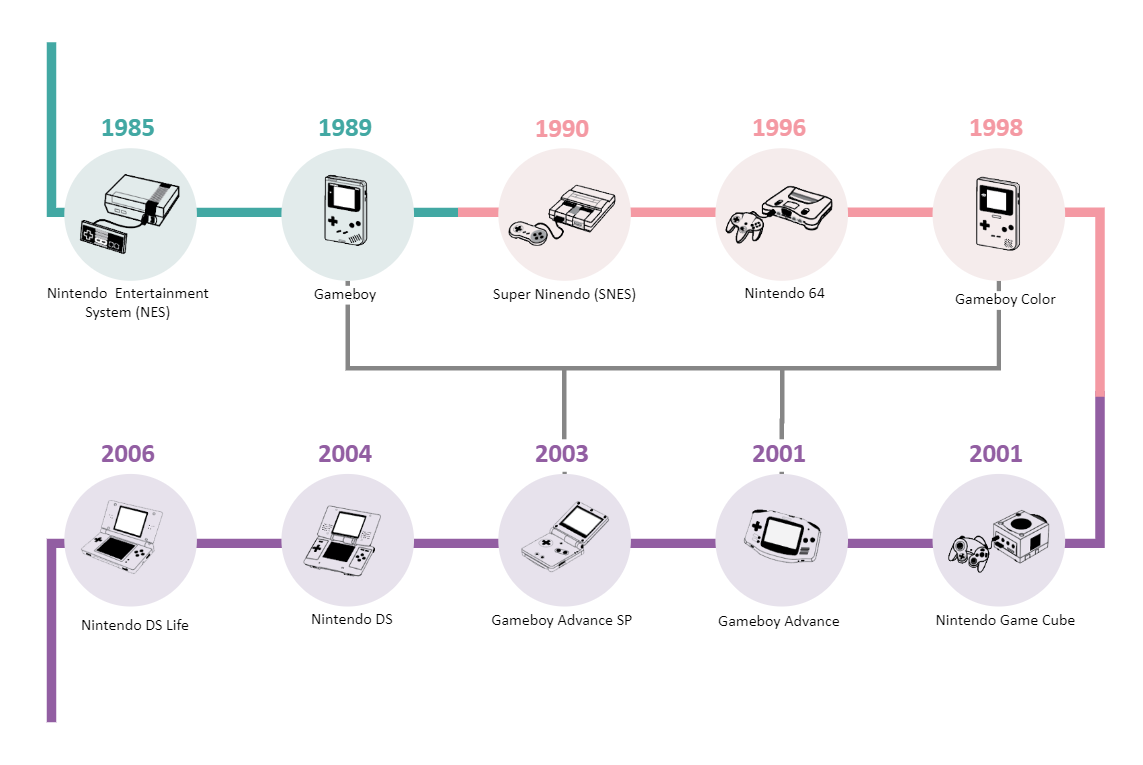