A Guide to Understand Earth Revolution with Diagram

The Earth is the third planet of the solar system, and it rotates on its axis. The direction of the Earth’s rotation is towards the east, and it occurs in a prograde motion.

Generally, the Earth takes 24 hours to complete one rotation concerning the sun, but the time varies because of the moon’s tidal effects. The Pythagorean school of Greek philosophers believed that Earth rotates, and Nicolaus Copernicus first discovered that it does around the sun. This rotation of the Earth is the reason for the diurnal changes.

There are imaginary lines that are drawn all over the Earth are known as terrestrial coordinates. Some lines pass through the north pole and south pole to create circles. These lines are called longitude. There are also some equidistant circles starting from the north pole to the south pole. It is parallel to the equator, which passes through the center of the Earth. These lines are called latitude. The geolocator system uses latitude and longitude for finding out the location of a particular region. There are Earth revolution and Earth rotation considering the life span of Earth. 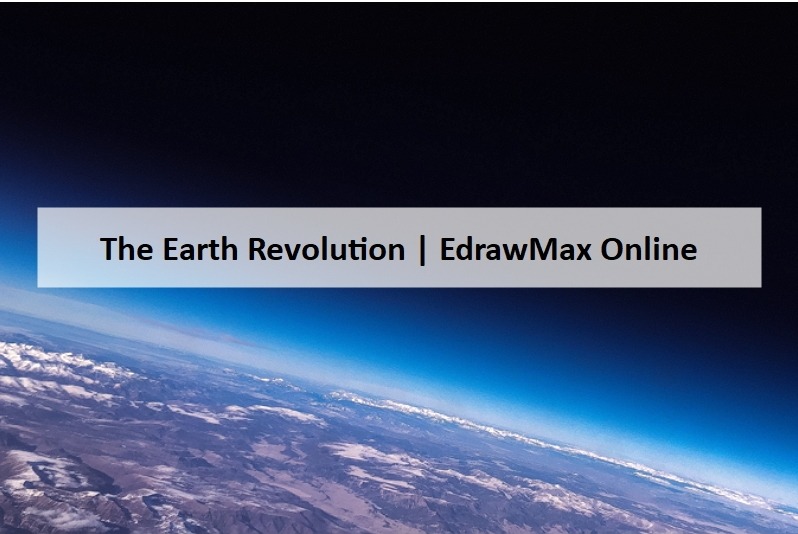 The Earth revolves around the sun, and this is responsible for seasonal changes. The Earth takes 365 days to complete a whole revolution around the sun. It is considered a year.

Sun’s gravitational pull leads the Earth to revolve around it in an elliptical path. It also happens to the other planets present in the solar system. Due to the oval shape of the orbit, sometimes the Earth gets closer to the sun while sometimes it gets farther. On, January 3 the Earth moves, closest to the sun, about a 147million km away, when it is at the perihelion position.

On, July 4 the Earth moves farthest from the sun, at aphelion position. The speed of the Earth’s revolution is 27km per second. However, it is not constant, and the Earth's speed becomes slower when it moves at aphelion while its speed gets faster when it goes to perihelion. 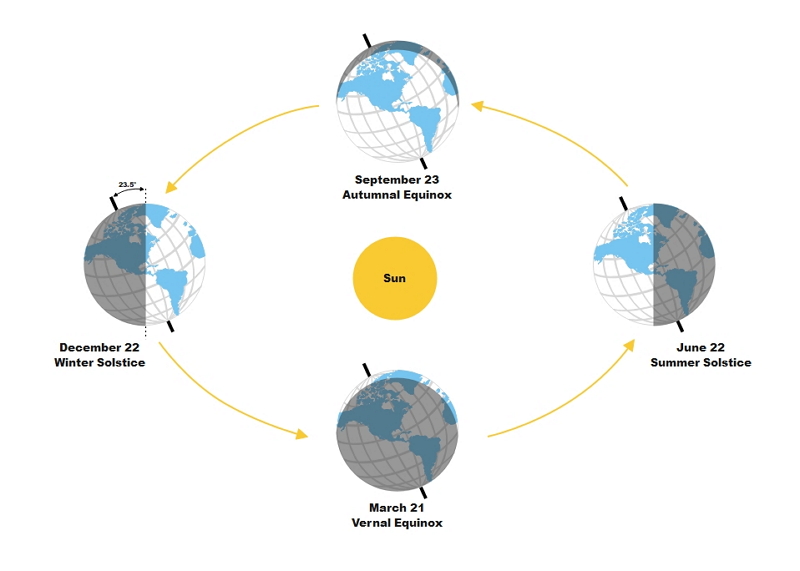 The Earth also rotates on its axis as it revolves around the sun. The Earth's axis is an imaginary line that goes through the center of the Earth from the north pole to the south pole.

The Earth spins around this imaginary axis, and the movement is called rotation of the Earth. The Earth requires around 23 hours, 56 minutes, and 4 seconds to complete a full rotation.

The Earth rotates on its axis and revolves around the sun, at the same time, leading the days to increase a bit and making them 24 hours long. The speed of the Earth’s rotation in the equatorial region is 1700 km per hour. The speed decreases as the latitude increases and then becomes almost zero at the two poles. 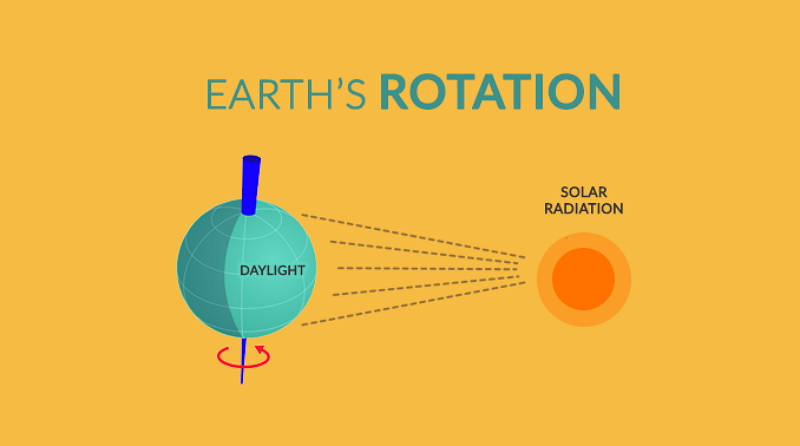 2. How to Draw the Earth Revolution Diagram?

The students can use the Earth revolution diagram to understand its movement around the sun and its motion on its axis.

2.1 How to Create Earth Revolution Diagram from Sketch

The students may create a drawing by hand, but the process is time-consuming, and they may fail to get a satisfactory result. The students can follow these steps to create an Earth revolution diagram by hand:

Step 1: The students need to draw a circle with rays all around it which signifies the sun. Then they can draw another circle smaller in size than the previous one, at a distance from the sun. This smaller circle is the Earth. The students can color the sun in yellow and the Earth in green and blue to signify the green land and blue water.

Step 2: After that, they have to draw a smaller circle than the Earth near it, grey in color. It is the moon. Now, the students have to create an orbit around the Earth, where the moon resides. Draw an arrow on the same, pointing towards the right, indicating the motion. It should be in a tilted position to show the Earth’s tilted axis.

Step 3: Draw another orbit around the sun, indicating the Earth's location. Show the motion of this orbit with an arrow pointing towards the right direction.

Step 1: The student can comfortably work on the easy-to-use EdrawMax Online tool. To start with the diagram, they need to open the EdrawMax Online tool and then open New. After that, they need to find the Science and Education tab. There are multiple Science and Education related diagrams present in this part which the students can use for their lessons. 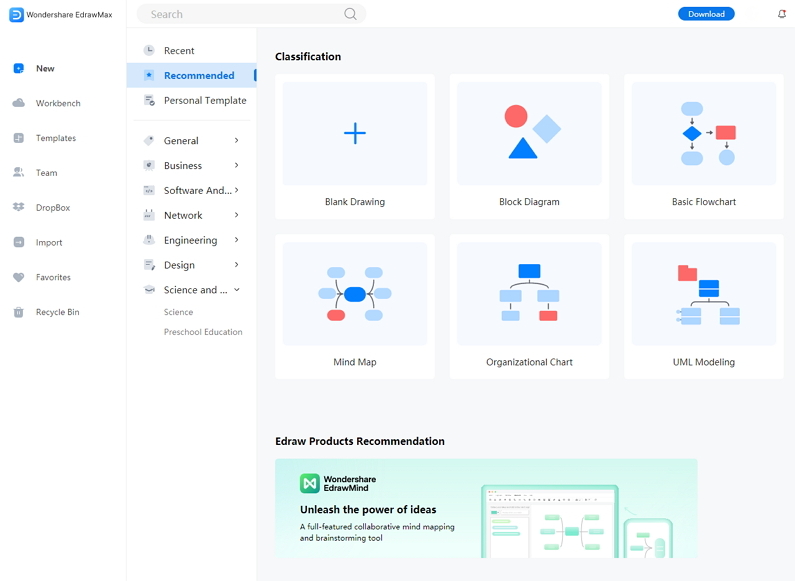 Step 2: The students have to select the Astronomy option from the Science and Education. In this part, they can find the Earth revolution diagram. They can choose it and then modify the picture according to their requirements. It is effortless to create the same. The students can create a high-quality Earth revolution diagram with a snap of the finger. Thus, EdrawMax Online is the favorite diagramming tool of many users. 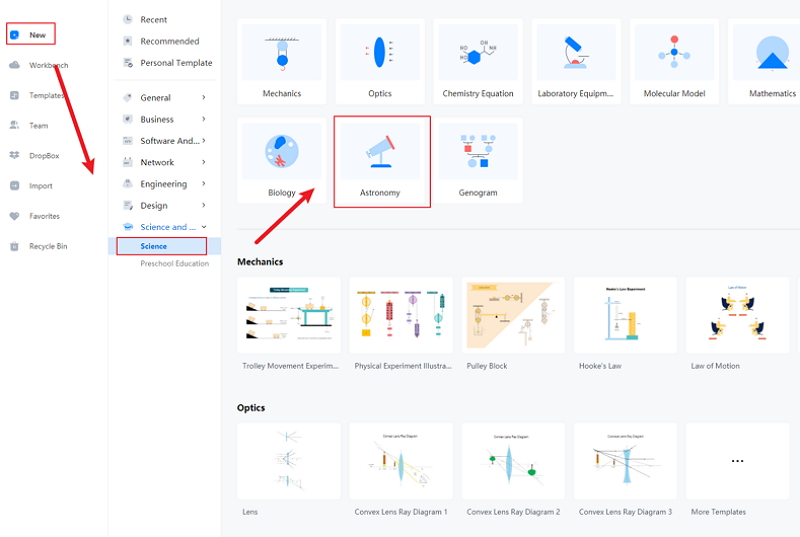 Step 3: After selecting the template they require, the students should modify it as per their choice. The tool gives the students some hassle-free options to edit their diagrams. They can work on those images according to their preference to create a high-quality Earth revolution image.

Step 4: Once the student finishes their picture, they can save it in multiple file formats. They can also export it for future use. It can help them to have the perfect Earth revolution diagram for their projects and lessons. 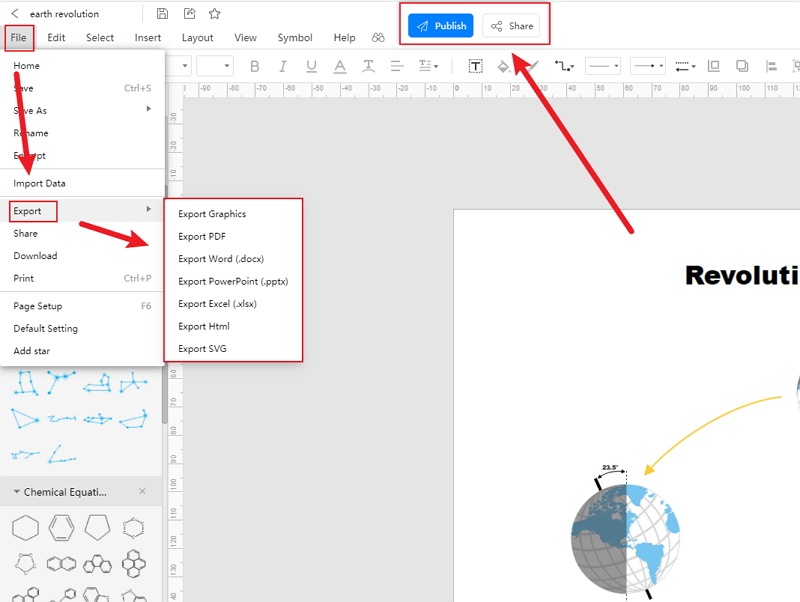 Here are a few facts to know about the Earth’s Revolution:

If students want to know about the temperature change, diurnal changes, and time zones, they need to learn about the Earth’s revolution and rotation. To have a thorough understanding of these concepts, the students can use an Earth revolution diagram. It is tough to create a good quality Earth revolution diagram by hand, and for that, the students must use the EdrawMax Online tool. This easy-to-use tool can help them to create a perfect picture without much hassle.

In conclusion, EdrawMax Online is a quick-start diagramming tool, which is easier to make earth revolution diagram and any 280 types of diagrams. Also, it contains substantial built-in templates that you can use for free, or share your science diagrams with others in our template community.