An In-Depth SWOT Analysis of Ford

Ford Motor Company, is an American automotive company founded by Henry Ford and 11 associate investors in 1903. The company manufactures passenger vehicles, trucks, and tractors, as well as parts and accessories for automobiles with its headquarters based out of Dearborn, Michigan. Ford’s SWOT analysis will help us understand the current workings of this company.

Henry Ford designed his first experimental car in 1896 in a workshop in Detroit, behind his house. The first Ford car was manufactured at the Mack Avenue plant in July 1903, after the establishment of the Ford Motor Company.

The 1908: Ford launches Model T which has become one of the world's most famous vehicles.

The 1941: Ford begins making general-purpose "jeeps" for the U.S. military and fully switches to military manufacturing from February 1942 onward. Civil production did not resume until July 1945.

1988: Ford's worldwide earnings amounted to $5.3 billion, the largest of any automotive corporation to that date.

1990: Ford launches the sport utility vehicle Explorer. While the Explorer is the best-selling model of the nation's SUV, sales reached a 15-year low in November 2005 and fell 29 percent in 2005.

2001: Ford Motor voluntarily recalls a further 13 million tires and Bridgestone/Firestone dumps Ford as a client, claiming that Ford used the tire manufacturer as a scapegoat to divert attention from Ford Explorer problems.

2005: Ford loses market share for the 10th year in a row, and also loses its status as America's best-selling Chevrolet brand to GM.

Why Use SWOT Analysis for Ford?

SWOT stands for Strengths, Weakness, Opportunities, and Threats. A SWOT analysis describes the strengths a company should utilize to resolve its vulnerabilities, identify opportunities and counter risks. 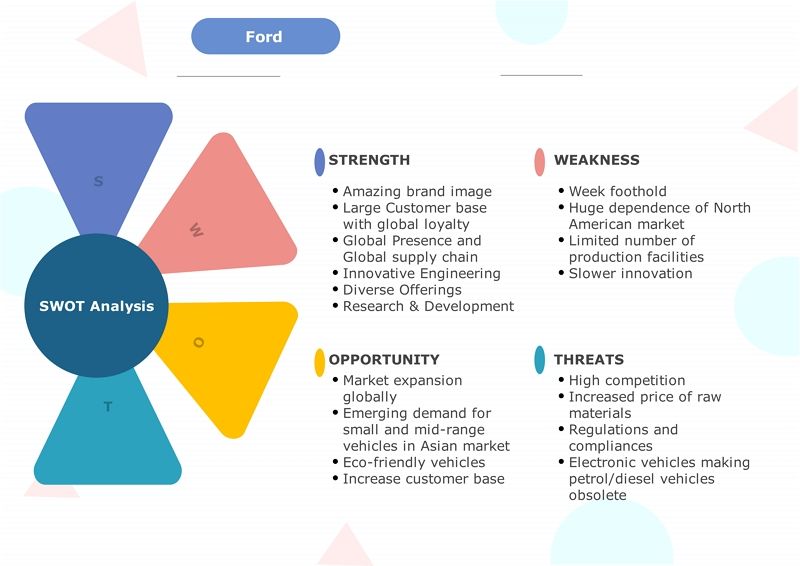 Ford’s SWOT analysis gives us the conclusion that the automobile company has sustained itself over a century, making it one of the pioneers in the industry. To continue market expansion and increase profits Ford needs to -