What Is A Kinship Chart?

What Is A Kinship Chart?

Kinship charts, also called kinship diagrams, demonstrate relations. You can use a kinship diagram to illustrate your lineage, which is similar to a family tree chart or a pedigree map. They are more frequently used by anthropologists to easily draw out relationships as they conduct interviews and to portray a culture's kinship structure without displaying specific names.

Such diagrams decide how we interact with others through descent and marriage. This is a simple form of social organisation. Kin who are linked to us by descent (parent to child) is called consanguine or blood relations. Anthropologists oftentimes examine how many ties there are between people.

The following scenarios can be applicable for making a kinship chart.

Blood-based kinship is separated into two different for instance lineal and collateral. Near blood, relatives are called lineal relatives in a direct line of descent. Types of linear relations include grandparents, father, son and grandson. Other lineal kinship successors such as uncle and their kids are referred to as collateral relatives.

Benefits of Using A Kinship Chart 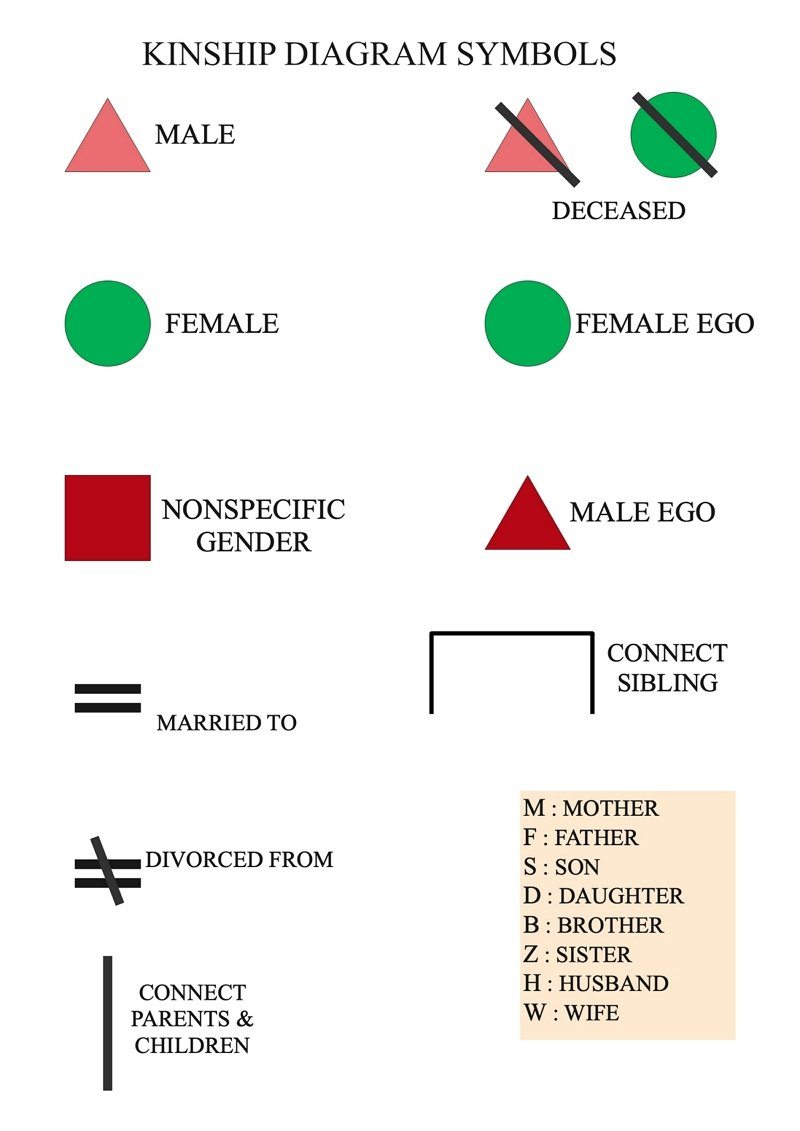 How To Make a Kinship Chart?

Relationships are identified by the concept of a central entity called EGO. When you have the symbols down, making your kinship chart online is easy, particularly in an intuitive, collaborative framework like EdrawMax.

Continue to stick to the concept of placing females to the right and males to the left at this stage. Use the symbols of the kinship chart mentioned above, add in the relationships you would like to show. Document the parents and ancestors of Ego above Ego, the siblings of Ego on the same rank as Ego, and the offspring and descendants of Ego under Ego.

For Ego's sister; suggest their relationship along the same line indicating Ego's connection with its siblings. Indicate the connection through a line of branching.

Draw a brother to her sister's right for Ego 's mother; suggest their relationship along the same line indicating Ego's connection to his siblings. So then, on the other hand, do the same. You can use various colours on your kinship diagram to show the paternal or maternal family lines to illustrate certain social ties.

If your kinship chart has become too complex, or if you want to make family relationships 100% transparent, you should add a marker underneath each form to demonstrate your relationship with Ego. For specific words, some kinship maps use shorthand, including "M" for mother and "B" for brother.

This kinship chart illustrates the EGO’s relationship and family links, extending to almost 4 generations of the lineage with the EGO being the third generation. 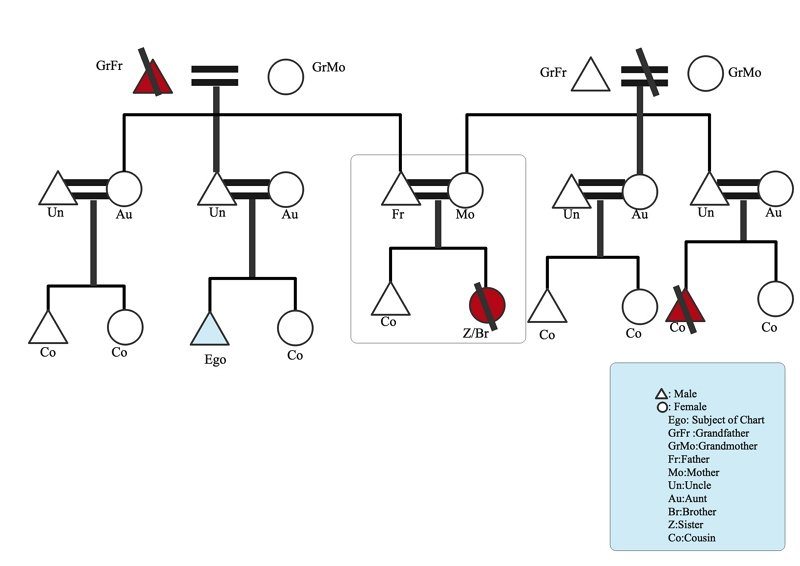 In this example, clear markers have been used to illustrate family relationships. With the basic symbols in mind (triangle for male, circle for female), one can easily understand the kinship chart.

Within a social system, a kinship chart has many significances. It helps in the representation of the members' rights and obligations in all the sacraments and religious practices, from birth to death. Kinship importance is observed at marriage and family functions.

It's easy to build your own kinship chart, whether you are charting your own ancestry or attempting to trace historical relatives. EdrawMax’s easy to use interface helps you design kinship charts with just a few clicks.