What is a Concept Map

In this article, we will learn everything there is to about concept maps, what they are, what use do they have, some real-life examples, and, most importantly, how to create one.

A concept map is a visualization tool for graphically representing knowledge or concepts. However, if you are looking for a definition to put in your project report, you may refer to the following viewpoint:

“A Concept Map is a graphical visualization tool for organizing as well as representing knowledge or concepts and is used to draw a relation between those concepts with their applicable ideas. The concepts are depicted as enclosed within circular or oval-shaped boxes and linked to one another with connecting lines; the phrases on the connecting lines show us the relation between two particular concepts.”

These concepts within circularly shaped boxes are called nodes in a concept map. These nodes get structured by maintaining the hierarchical order in which they are to be perceived and interpreted. The connecting lines are called arcs, and sometimes they have an arrowhead showing the flow of the map. 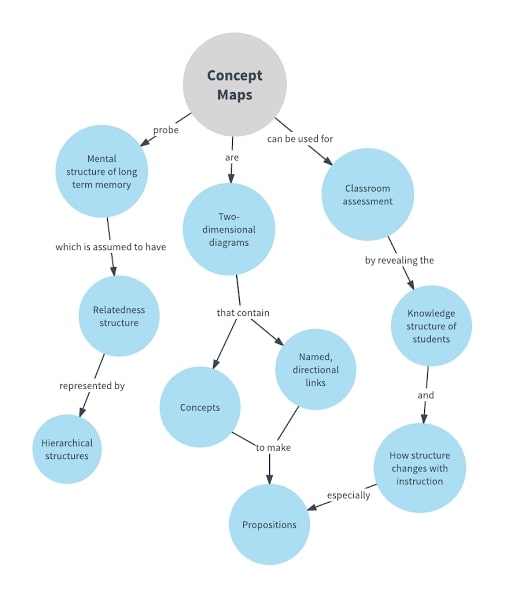 2. Key Elements of a Concept Map

Concept maps often referred to as conceptual diagrams may seem similar to other types of graphs. However, they have specific unique characteristics:

Concepts are the apparent patterns in any event or object that are designated by a label. They represent in the map as circular or oval shapes.

These are present on the lines connecting each idea to the next one. They describe the relationship between the two connected concepts. These phrases are as concise as possible, and typically they contain a verb. For example, cause, includes, etc.

It is the most critical element of a concept map. The most comprehensive and general concepts get placed towards the top with the more specific ones below, maintaining the pecking order. The way to read a concept map is from top to bottom, much like Japanese scriptures.

In a concept map, it often happens that concepts from different fields and domains are related to each other, and to define or label this relation, you use a cross-link. This is the element that brings in the creativity in a concept map.

Eg. I:  Concept Mapping in Science

The following Concept Map in science is used to visually represent the underlying concept of Acids and Bases, their characteristics, and the results of the neutralization reaction. Find more concept map examples. 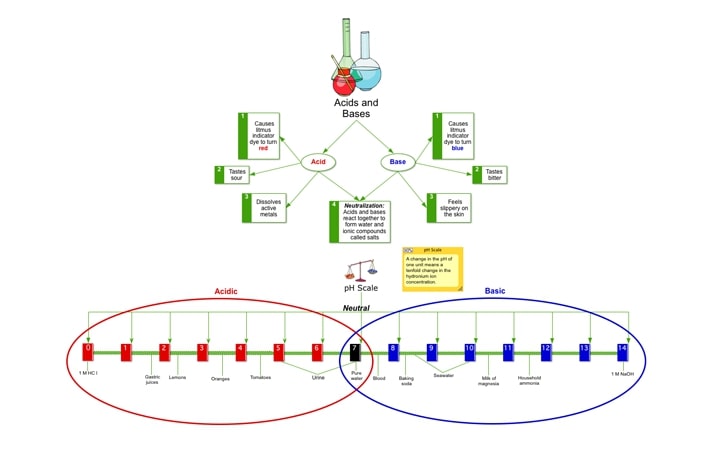 The following concept map example describes a car group and all the related concepts. It shows what a car group has and describes the car models that include theories of the manufacturer, body type, etc. this can be a valid map for starting your car dealership. 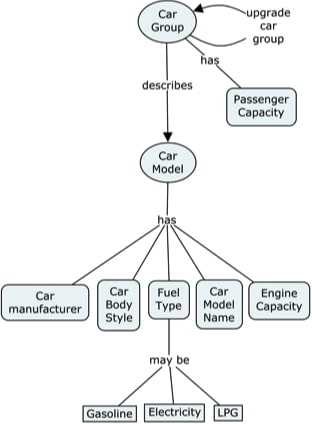 The following concept map can be used to teach students about the different parts of speech. For a better understanding of the key elements are highlighted in red.

4. Why is Concept Mapping Important?

The human brain processes visuals (photos, slides, etc.) much faster than it does so with texts, about 60,000 times faster. The theory of concept mapping revolves very much around this fact. As such, this tool is designed to help users visualize relationships between various concepts and improves their capability of comprehending complex subjects. It helps to form a mental connection, which in turn allows for better understanding and preservation of knowledge and information.

Although concept mapping generally applies to academia, it can be useful in various other fields as well. We will see them later on. There are a variety of benefits that one can extract out of it:

Concept Maps are easy to make, and you can use them for any area of content. The purpose of making a concept map is to depict information and concepts in an orderly visual representation. Not only it makes it easy to understand complex information, but your brain can also remember it for a longer time compared to plain text. It is also the reason why concept maps gained popularity in various fields such as research and business.

Concept Map for Nursing: Concept mapping is a helpful tool for nursing. You can easily represent detailed and specific information using concept maps. It helps you define patient issues, and you can group patients with similar issues for data comparison. After defining the issue, you can organize the patient's assessment results, and you can use the results to diagnose the issue and select the procedure to deal with it.

Concept Map for Education: Concept maps were first introduced as an educational tool to help students better understand various concepts and visually represent their research. Concept maps are commonly used for educating students by increasing meaningful learning. Teachers can share a concept map with important information about any topic. It tells students about the areas where they need improvements. Concept mapping helps students develop critical thinking and problem-solving skills.

Concept Map for Business: Concept mapping is beneficial for businesses because it helps create a concept model. A concept model depicts both business requirements and solutions. You can use concept maps for marketing as well. It helps with brainstorming and developing new business strategies. You can also use it to draft documents and make presentations for your team.

Concept Map and Mind Map might sound similar, but both of these are primarily different. It is widespread to take one as the other. Both of these maps visually represent ideas and information but the way they both work is different. Here are some of the key features that will help you tell both of these apart.

The general concept behind the topic is at the top of the map. Based on the hierarchy, we start looking at the concept from its basic idea and then move towards related concepts. It is a network of concepts that represent interconnected ideas and their relationship that makes it more logical.

Modifying a concept map gets more complex when you add more than twenty nodes, but you can easily verify it because every idea or concept connects to others. It represents tacit knowledge and depicts many concepts cross-linked with other concepts. 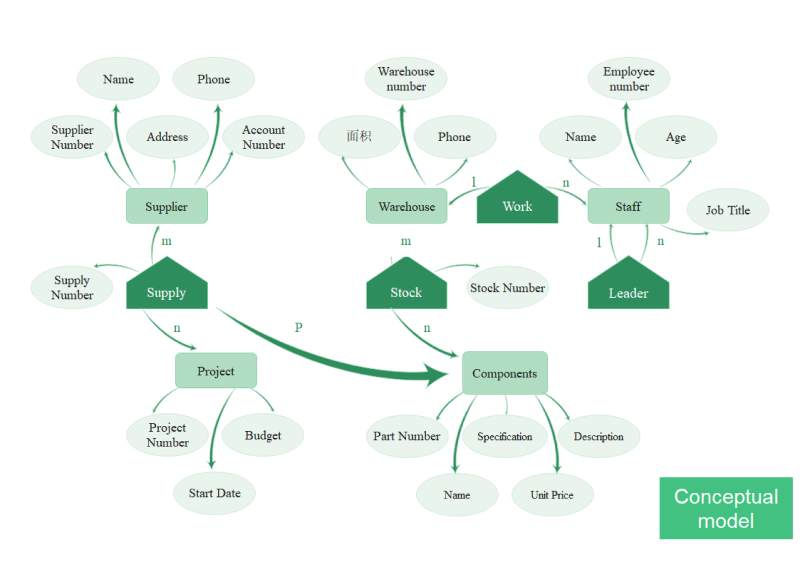 Modifying a mind map is easy even when you represent lots of information, and your map contains many nodes, but it also means that you can't verify it. It can only represent nodes with a simple relationship that makes it easy for brainstorming and making quick notes. 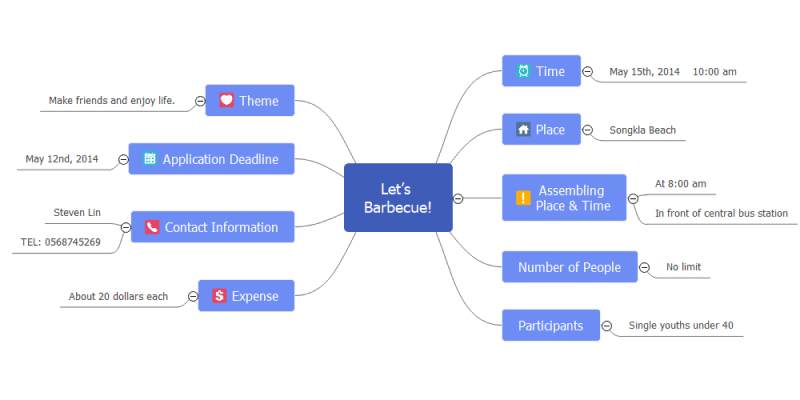 Although concepts maps are very beneficial to users, especially students, it does have some limitations or flaws:

8. Evolution of the Concept Mapping Theory

The origins of the Concept Mapping Theory date back to Dr. Joseph Novak’s Theory of learning in the 1970s. He and his researchers team from Cornell University were trying to understand and describe the conceptual understandings of children.

They were studying Piaget’s theories of cognitive operational stages at the time. Psychologist Jean Piaget postulated that children below the age of eleven could not comprehend abstract concepts like, for example, the nature of matter. Furthermore, Dr. Novak also got inspired by the works of David Ausubel, a well-known proponent of Piaget’s theories. Based on these backgrounds, Dr. Novak decided to work on a new project where they would observe minute changes in the behavior of children while learning new ideas.

He took Ausubel’s work as a basis for his research project.

According to David Ausubel: “The single most important factor in learning is what the learner already knows; to establish that fact and teach the learner accordingly is the best path to follow.”

It became the cornerstone for his “Theory of Learning” and the concept map. Thus from 1972 onwards, the concept map has become the most widely used tool and is used by specialists across many fields from science & education to business & healthcare.

9. How to create the ideal Concept Map with EdrawMax Online?

EdrawMax Online is the best tool for creating concept maps. It is compatible with both Windows, macOS and Linux with numerous inbuilt templates to help you create concept mapping in science and other fields. Here you can find detailed steps of how to create a concept map.

Let us see how you can create the ideal concept map with EdrawMax Online:

Step 1:  As the first step, open the EdrawMax Online to sign up and login.

Step 3:  From the ‘Concept Map Shapes’ library to the left of the canvas, drag and drop the shapes you want and double click on the forms to label them.

Step 5:  Keep doing this till all the concept shapes edit and connect as per the project.

Step 6:  Finally, save your project on the Google cloud service.

What is a nursing concept map?

A nursing concept map is a visual representation of patient issues, diagnosis, and procedure. It is a graphic tool that can integrate inputs from various experts on the same issue. It makes it easy to diagnose the cause of a patient's issue after they define it. Doctors can devise various strategies with concept mapping.

What is a concept map in education?

Students use concept maps to create a graphical representation of various topics and their research. A concept map comes in various types. Students can use it as a Venn diagram, flowchart, or T-chart to depict information and concepts. It makes learning easy and creative.

What is a photosynthesis concept map?

A photosynthesis concept map makes it easier for students to understand the process of photosynthesis in plants. It contains detailed information related to every step in a hierarchal manner. It helps students remember which process takes place first and what reactions are going on behind it.