What is Scatter Plot - a Comprehensive Guide

What is the Scatter Plot?

A Scatter Plot is a straightforward yet powerful tool for visualizing data, which are new in this field of statistics and data science. Today we are going to learn everything about Scatter Plots.

So what is a Scatter Plot? Well, “A Scatter Plot is a graphical tool for visualizing the relation between two different variables of the same or different data groups, by plotting the data values along with a two-dimensional Cartesian system.”

The above definition will become more precise with the Scatter Graph below. Scatter Plots are also known as Scatter Charts or Scatter Graphs. 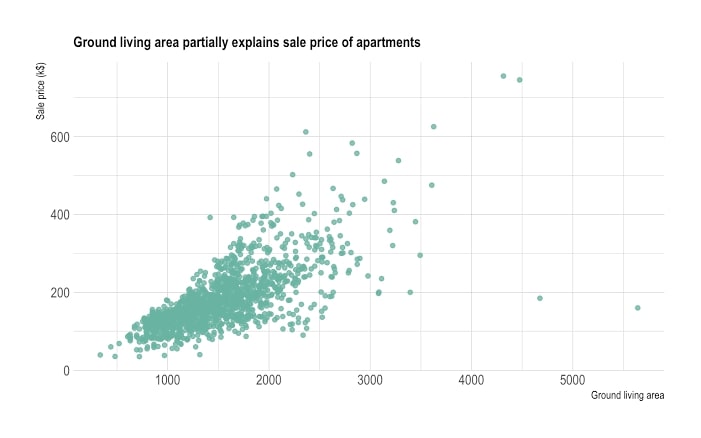 The above graph made is with two different variables; diameters (in centimeters) and height (in meters) for a group of trees. While the horizontal X-axis depicts the width, the longitudinal Y-axis represents the height with each dot specifying a tree. We can derive various correlations between the variables using such plots.

When to use a Scatter Plot?

A Scatter Chart or Plot analyzes the relation between two discrete variables. That is why when we plot the aggregate data, we find different forms in which the data presents itself. The most widely used application of a Scatter Plot lies, however, in finding out the correlation that exists or not between the two variables.

For example, say we know the values for one variable, best represented along the horizontal axis, and we need to figure out the best possible prediction for the vertical axis. A Scatter Graph is very useful at such an impasse.

A Scatter Chart can be useful in the following scenarios:


How are the variables of a Scatter Plot related to each other?

The term correlation defined as the nature of the relationship between two variables (in this case, discrete variables) in any statistical study or survey.

The Line of Best Fit is drawn up according to previous data collected and is used to predict the ideal correlation between two given variables. It acts as a reference while plotting a Scatter Graph.

When the value of the dependent value decreases with the increase in the cost of the independent variable or vice-versa, then we say that the two variables have a negative correlation.

In case we don’t find any apparent relationship between the two variables under study, we say there is no correlation between them.

Problem: To find the relation between electricity bill and temperature;

Solution: The data is gathered and tabulated, and the values are plotted in a Scatter Chart as follows: 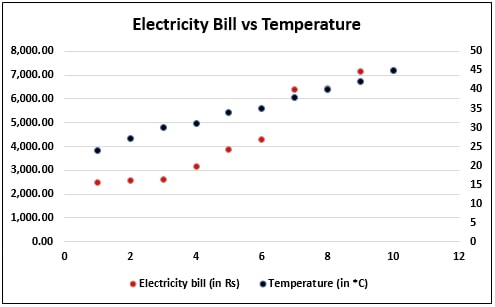 Problem: To find the relation between age and hours of sleep needed;

Solution: Once again, the data gathered is after survey, and a Scatter Graph created as follows: 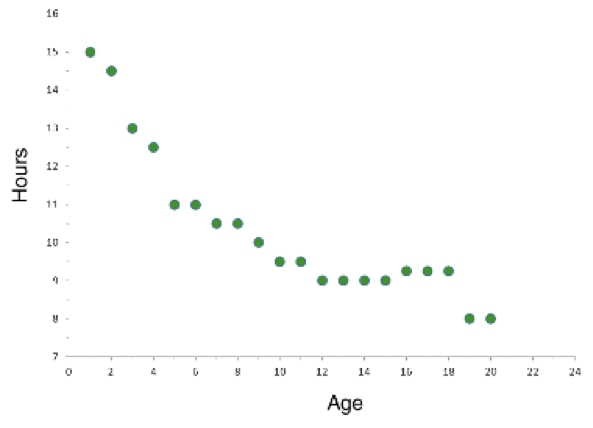 We can see from the graph that as age increases, the amount of sleep decreases. Thus we can say that there is a clear negative correlation. However, the data here gets restricted until the age of 20, which means the relation might or might not change for higher values of the age.

In such a scenario, there is no relation between the two variables, and we can see it from a Scatter Chart as there is no direction for the values. Here we have taken two independent variables like say height and hours of study. They have no apparent relation to the graph if drawn will look something like this: 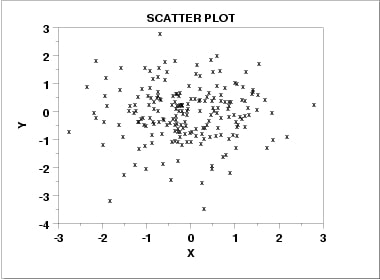 How to create a Scatter Plot with EdrawMax Online?

Nowadays, creating a Scatter Chart has become very easy. You no longer need to do it with pen and paper, even though it is how we learn. Then again, at a professional level, the best results are always seen when you use a diagramming tool like the EdrawMax Online, to create Scatter Plots. It is a great tool to have in your inventory. Moreover, being an online tool, you don’t need to download it on your computer.

Before drawing a Scatter Graph, you need to understand the different correlations and correlation coefficients as described above.

Secondly, get familiar with the interface of EdrawMax Online.

With that taken care of, let us see how we can create a Scatter Plot using the EdrawMax Online:

Common issues that you may face

Solution: Do Random Sampling of the data values and plot these samples as it is a subset of the whole data set.

2. Correlation does not imply causation:

Solution: In such cases, different tools, such as Pearson’s Correlation Coefficient, comes in handy.

In this window, you can create your wiring diagram by choosing different wiring diagram symbols from the symbol library. There are various symbols available such as transmission path, qualifying symbols, semiconductor devices, switches and relays, and other necessary electrical symbols.