A Guide to Understand Solar System with Diagram

There are multiple planetary systems present in the universe, and the one which has the sun as its center is known as the solar system. From the Latin word 'Solis,' the name solar is derived. Planets, dwarf planets, comets, asteroids, meteoroids, etcetera, celestial bodies make up the solar system. The sun is present in the Milky Way Galaxy and takes around 230 million years to complete one complete round on its spiral orbit. 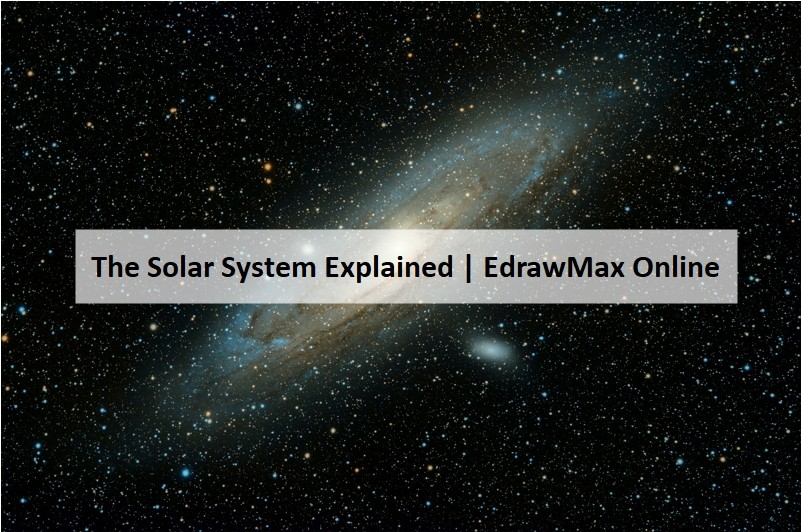 1.1 The Classification of Solar System

The sun is the center of the solar system and is the site where the hydrogen and helium fusion reaction occurs. It radiates energy, electromagnetic radiation. Hence, blinding light comes out of it. The majority portion of the Solar system consists of a near-vacuum, interplanetary medium. The solar flares and coronal mass ejections are the reason behind the geomagnetic storms.

The inner solar system consists of terrestrial planets and asteroid belts. Silicates and metals are mainly there in this region. The bodies located in this part of the solar system are closer to the sun than other regions. The distance of less than 5 AU from the sun makes this inner solar system. The four inner planets have a rocky landscape and no ring. Therefore, they may or may not have moons. These four planets are Mercury, Venus, Earth, and Mars.

Apart from Ceres, other asteroids are called small solar system bodies and consist of rocky and metallic components. Asteroids having a size smaller than one meter are named meteoroids and micrometeoroids. Ceres is the largest asteroid and may be called a dwarf planet. Asteroids are classified into asteroids groups and families considering their orbital characteristics.

It consists of giant planets, their moons, centaurs, and short-period comets. Most planets in this region have water, ammonia, methane, which stay solid due to the low temperature. The four giant planets of the outer area are Jupiter, Saturn, Uranus, and Neptune.

Centaurs are icy comet-like entities. They can be classified as a comet because they also form coma while approaching the sun.

Comets are celestial bodies made of huge volatile ices. They have eccentric orbits and create coma as they enter the inner solar system. One can see their bright, long tail made of dust and gas from the earth. Comets can be short-lived (around 200 years) or have a long lifetime of thousands of years. Scientists deciphered that the Kuiper belt gives birth to short-lived comets while the long-lived ones generate from Oost Cloud.

The trans-Neptunian region or the third region of the solar system lies beyond the orbit of Neptune. This part mainly has the Kuiper belt, Pluto, and other dwarf planets.

The ending point of the trans-Neptunian region, from where the interstellar space starts, is known as the farthest region. The heliosphere, detached objects, and hypothetical Oort cloud are present in the farthest region of the solar system.

1.2 Composition of the Solar System

The solar system includes eight planets, and the earth is one of them. They are:

Other than planets, there are moons, and dwarf planets like Pluto, thousands of asteroids, meteoroids, and comets. 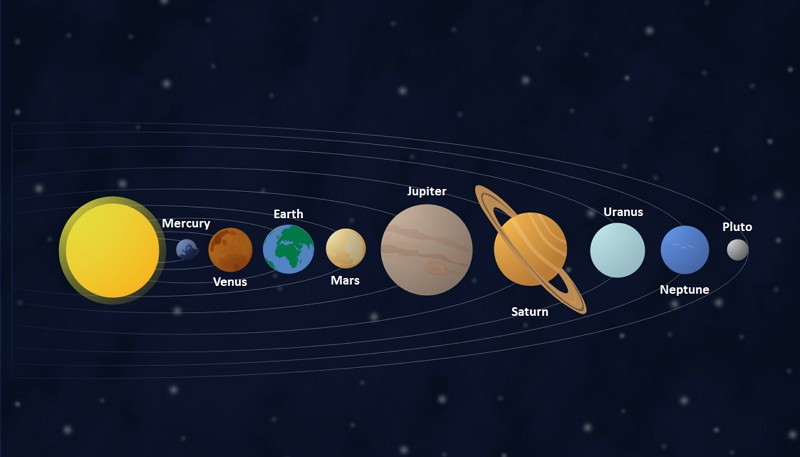 2. How to Draw the Solar System Diagram?

The students must learn about the solar system if they want to learn more about the planetary system and the earth. They can use a solar system diagram to understand the distance of the plants from the sun.

2.1 How to Create Solar System from Sketch

Step 1: To start with the drawing, they need to create a massive yellow circle at one side of the paper, representing the sun, the largest celestial body of the solar system. Mercury stays closest to the sun and smallest in size. The students need to draw a small circle near the sun. Just to its right, they have to draw a circle sizeable than the smaller one. Now, this is Venus. They can shade it with a yellowish-brown color. 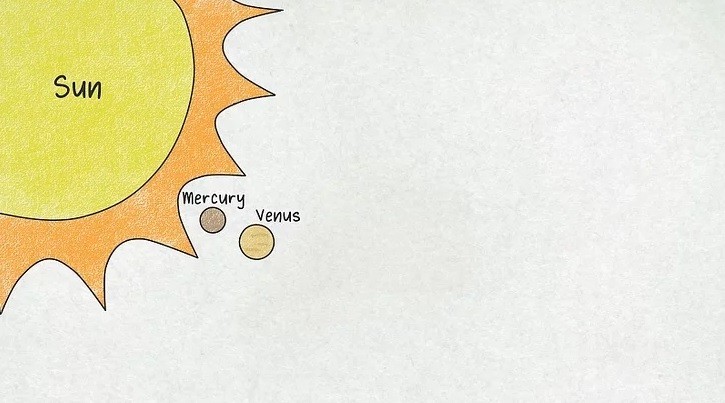 Step 2: At the right of Venus, draw green and blue shaded earth, enormous than both the previous planets. The students need to create Mars next; it is a red planet present next (on the right side) to earth. For this, the students can draw a smaller circle with red and orange colors. 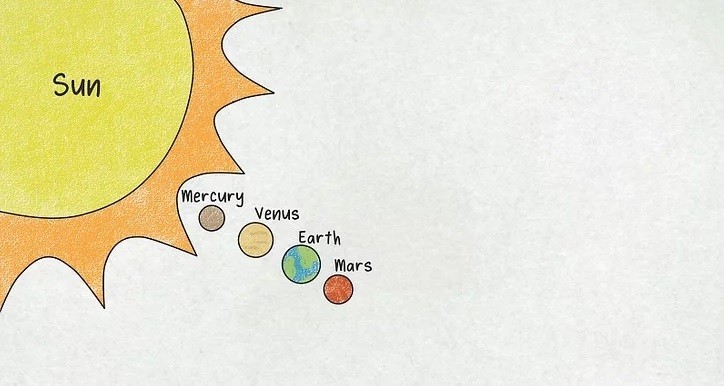 Step 3: After that, the students need to draw a big circle on the right side of Mars. This is Jupiter, and it is massive than all the others created so far. They need to give it a yellowish-orange shade. Students should now make a smaller circle on the right side of Jupiter. It is Saturn. It has a small ring around it. They can use yellow, gray, brown, and orange colors for the planet Saturn. 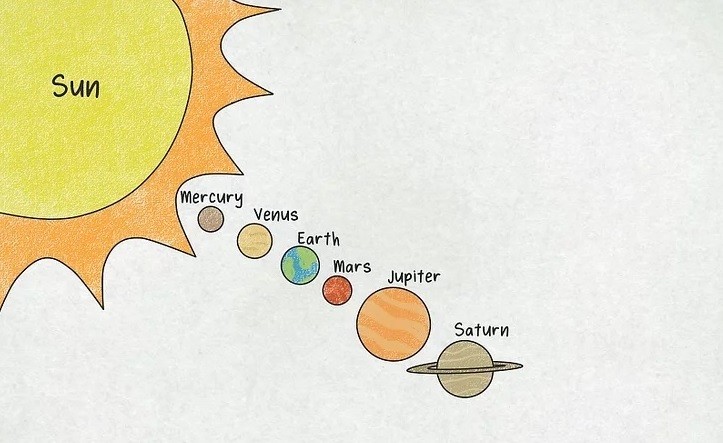 Step 4: The students can draw Uranus with a tilted ring around it. It is blue and tinier than Saturn in size. Finally, they have to draw another circle with an inclined ring representing Neptune. They can draw orbits around the planets in an elliptical shape considering the sun as the center while starting from and ending at the edges of the page. 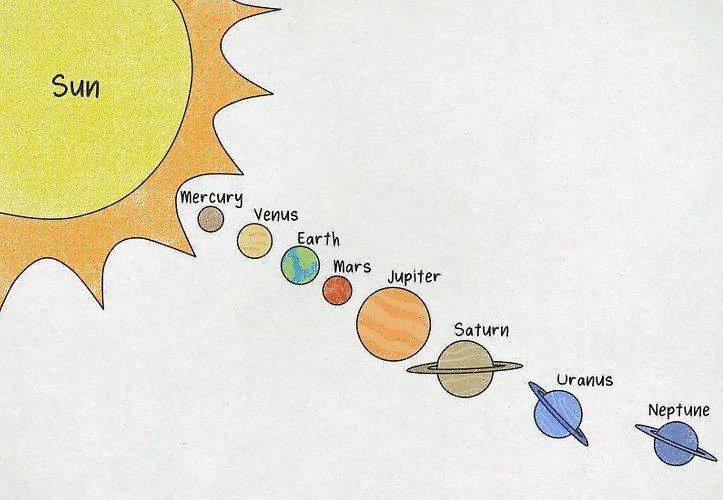 2.2 How to Create Solar System Online

Step 1: To start with the process, the students need to open the EdrawMax Online tool and then open New. After that, they have to click on the Science and Education tab. Here, they can find a wide range of high-quality diagrams for learning and project works. 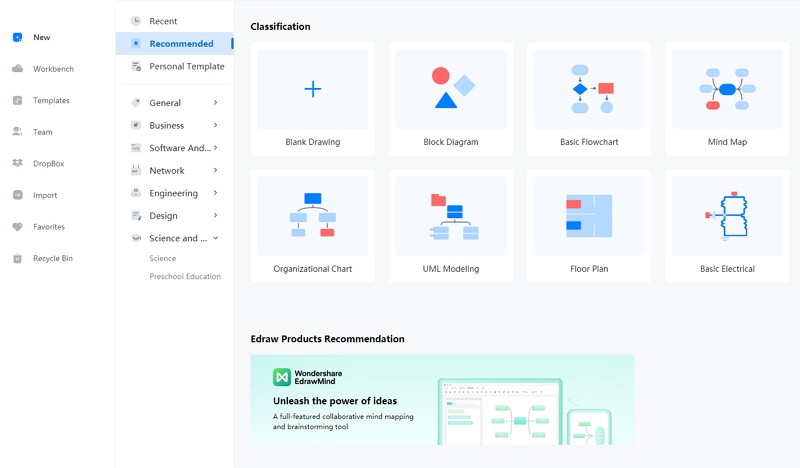 Step 2: To create a high-quality solar system diagram, the students need to select the astronomy option from the Science and Education tab. Then they can edit the solar system diagram as per their choice. It can allow them to create a good quality image for their projects and dissertation papers. 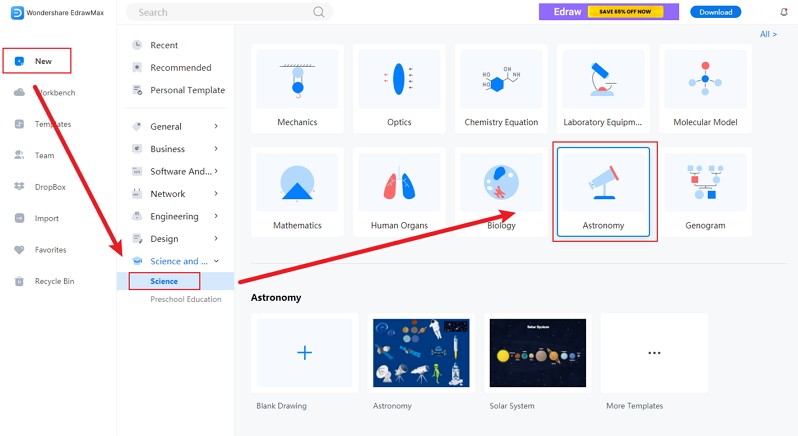 Step 3: After selecting the template they require, the students should modify it as per their choice. The tool gives the students some hassle-free options to edit their diagrams. They can work on those images according to their preference to create a high-quality solar system image. 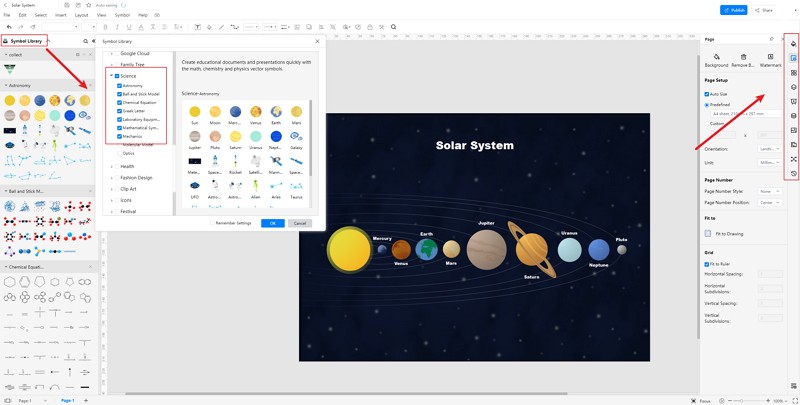 Step 4: Once the students have finished modifying the diagram, they can save it in multiple formats. They can also export the solar system diagram to use in the future. 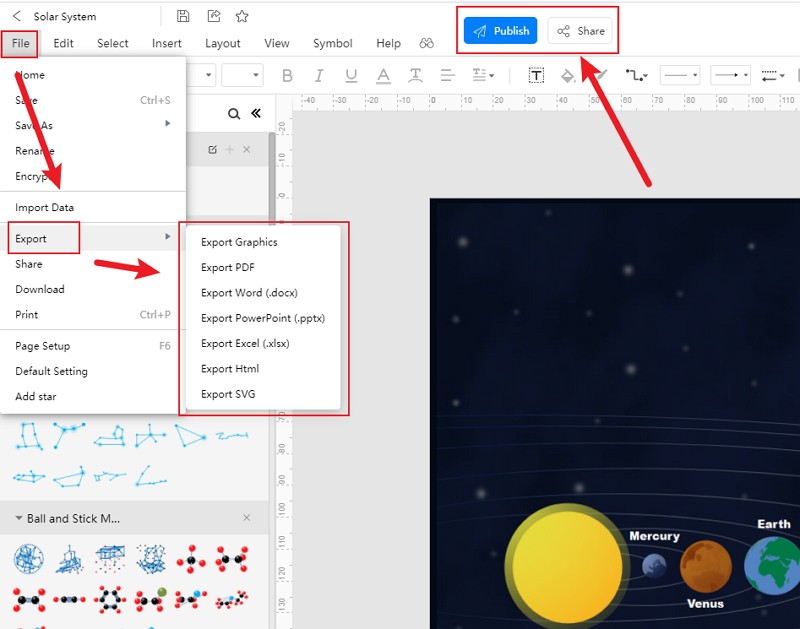 Here are some fun facts for the kids to know: