A Guide to Understand Digestion System with Diagram

1. What is the Human Digestion System

The digestion system is a complicated process that converts the food particles into their simplest form to collect nutrients from them, which further helps for cell growth, rejuvenation, and other body functions. The system mainly involves a tract that includes some main organs and some significant subordinate organs.

2. The Structure of the Human Digestion System

Mouth: The digestion system begins from the mouth. When a person eats a portion of food and chews them, the salivary glands secrete saliva. The saliva gets mixed with the food and creates a form that quickly gets absorbed into the body. After the food gets softer, the person swallows the food. It goes to the next part of the digestion system, namely the esophagus.

The Esophagus: Esophagus is there near the trachea. As the swollen and softened food reaches the trachea, it starts peristalsis movement to pass the food into the stomach. These epiglottides prevent the person from choking. There is a muscle called Lower Esophageal Sphincter. It begins its contraction to stop the food from going back to the esophagus from the stomach.

Stomach: The stomach is an organ where the process of food breakdown takes place. Different enzymes get mixed with softened food. The lining of the stomach releases strong HCL and other enzymes for the further breakdown of the food. As the food gets processed in the stomach, it moves onto the next part of the digestive tract, the Small Intestine.

Small Intestine: This part of the digestive tract consists of three segments, namely duodenum, jejunum, and ileum. It is a muscular tube having a length of 22 feet. The swollen food comes from the stomach to the small intestine for further breakdown with pancreatic enzymes and bile released by the liver. The duodenum participates in food processing, while the jejunum and ileum engage in nutrient absorption into the blood. After that, the residue turns into a liquid and moves to the large intestine or colon.

Rectum: When a mass of stool gets collected in the lower part of the colon, it moves to the rectum. It is a chamber present between the large intestine and anus. It holds the stool until there is any signal from the brain for evacuation. For disposition of the stool, the sphincter contraction occurs.

Anus: The anus is the ending part of the digestive tract, and it disposes of the undigested food called stool. It has sphincter muscle to control the movement of the stool. When this muscle group relaxes, the stool gets out of the body.

The helping organs that participate in human digestion are:

Liver: It plays a significant role in the digestion of food. It secretes bile, which gets mixed with food in the small intestine. Thus, helping in the digestion of fat and vitamins. It also takes the nutrients absorbed by the intestine and converts them into different chemicals according to the human body's requirements.

Gallbladder: This organ participates in digestion by storing and releasing bile. It concentrates the bile that comes from the liver and mixes it with food in the intestine while helping in the absorption or digestion of fat contents in food. 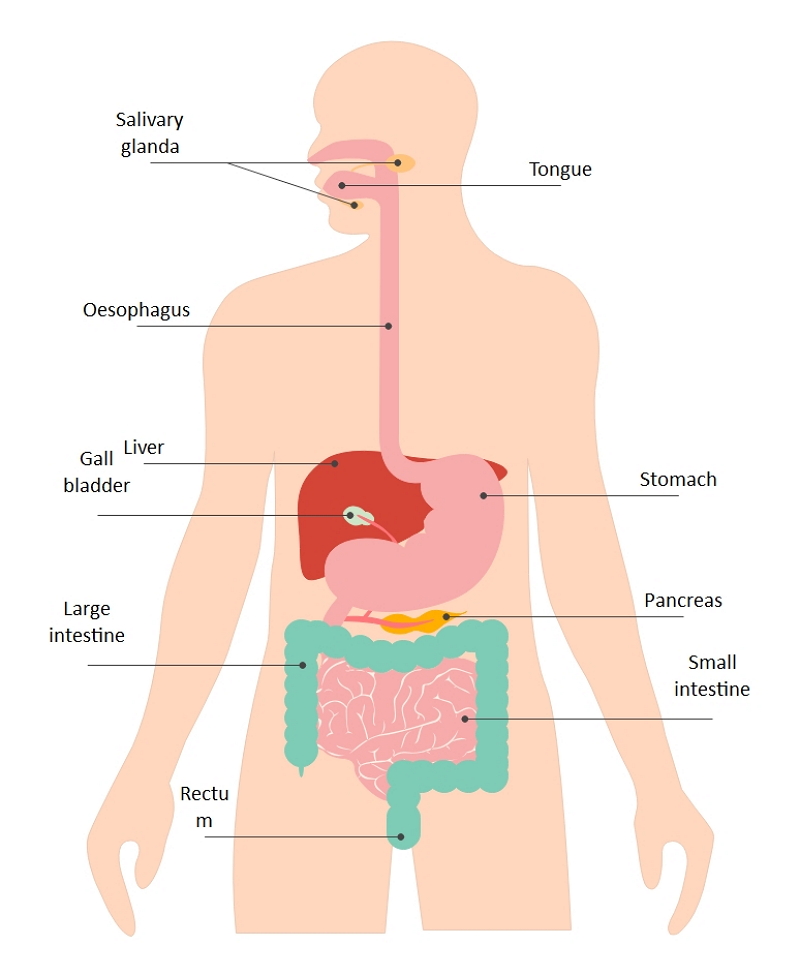 3. How to Draw the Human Digestion System

As the digestion system is a crucial part of the human body, students must know about the system and the organs participating in the process. However, there are multiple organs in the system, which makes it complicated. Here are a few steps that can follow if they wish to draw Digestion System.

3.1 How to Create Digestion System Drawing from Sketch

To have an apt idea about it, the students must use a diagram. Though making a digestion system diagram by hand is difficult, here are a few steps that they can follow:

Step 1: The system starts from the mouth and forms a pipe-like structure connected to the stomach, known as the esophagus. The stomach looks like a big bean-shaped sack people should draw these in the beginning. 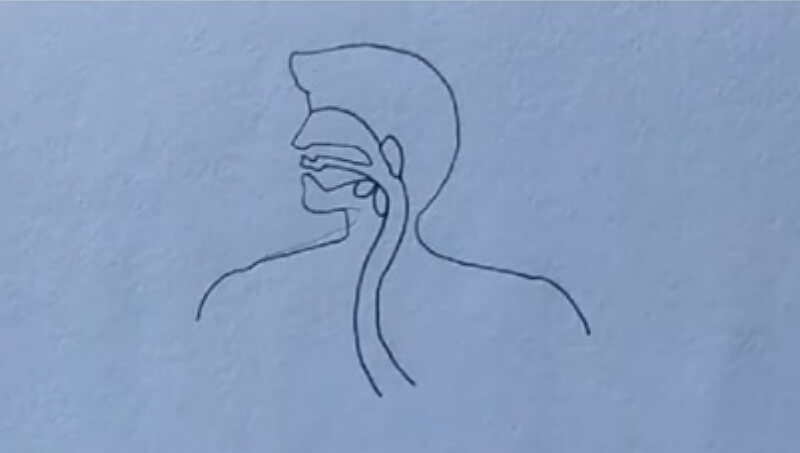 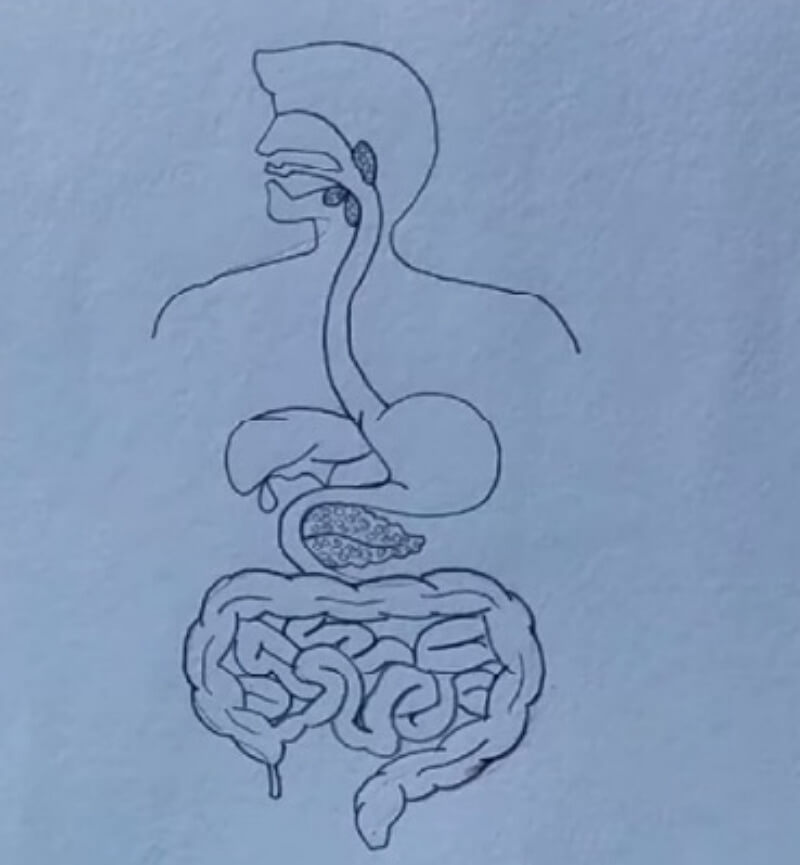 Step 4: Next, one should draw the pancreas. Just above the large intestine, there is a leaf-like structure which is called the pancreas–a triangle-shaped organ besides the stomach or the liver. Now one should label each organ of this system. 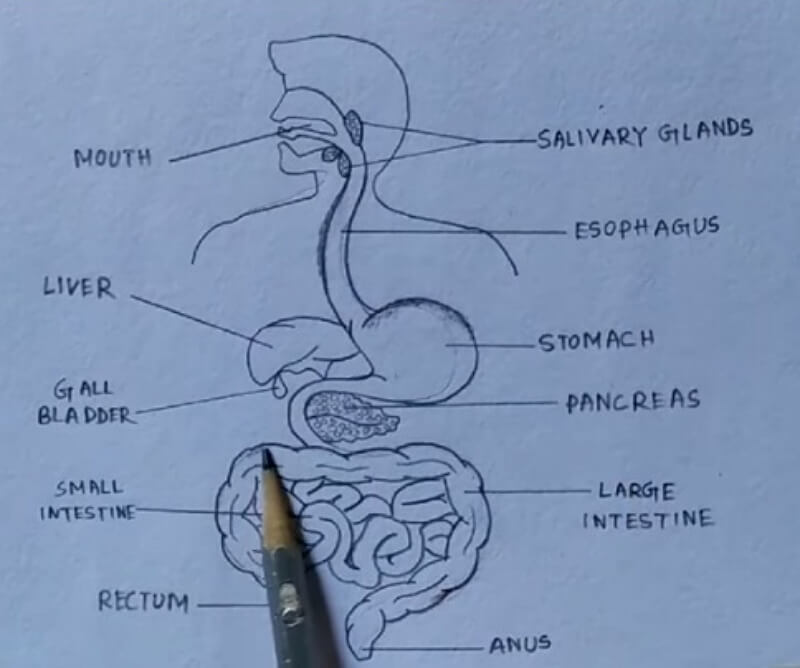 Step 1: EdrawMax Online is a user-friendly tool. Hence the students and researchers who do not have any prior experience can comfortably work on this tool. Its easy-to-use interface has made it a favorite of many people. Therefore, the tool has a massive user base. To start with the digestion system drawing, the students need to open the EdrawMax Online tool and then go to New. Under this section, they need to select Science and Education. 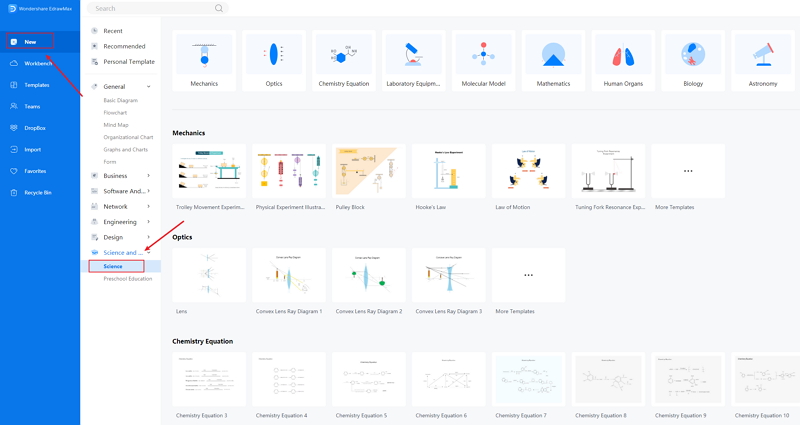 Step 2: For learning scientific concepts and the human body, it is best to use diagrams. The students can smoothly learn a challenging idea with the help of diagrams. Under the Science and Education section of this application, the student can get several scientific diagram types. From this part, they can choose the Human Organ option to receive images related to human organs. 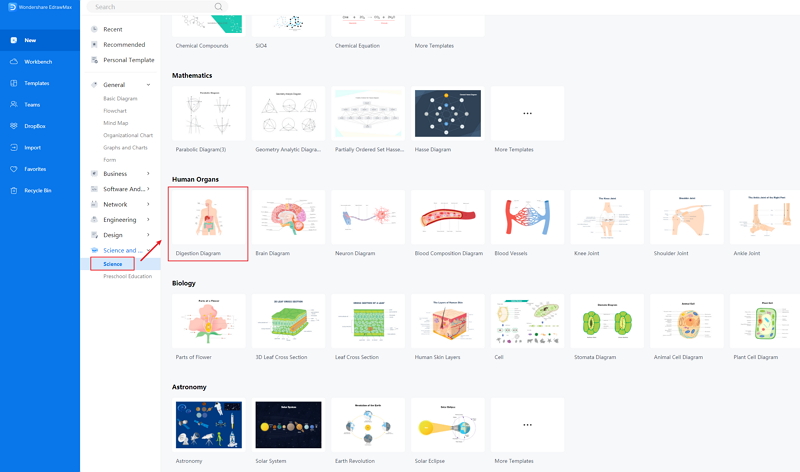 Step 3: The tool comes with voluminous editable diagrams, which are extremely useful for the students, researcher, and teachers. They can select one as per their requirement and then edit the picture according to their need. It can help them to get a high-quality image for their studies or dissertation papers. 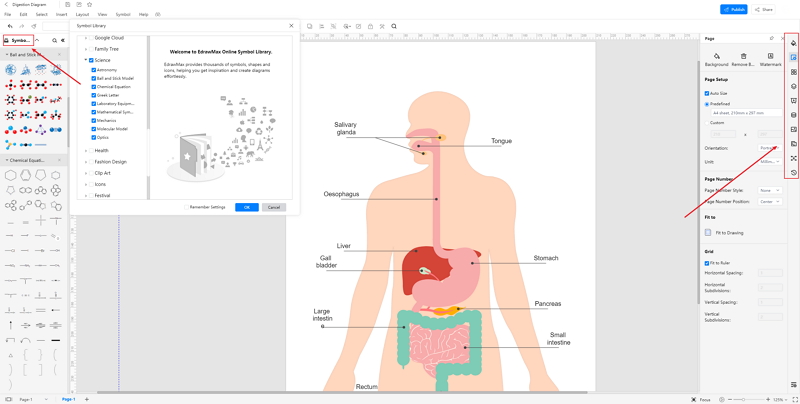 Step 4: When the student is satisfied with their diagram, they can save it. They can also export and use the complete digestion system image in their projects. 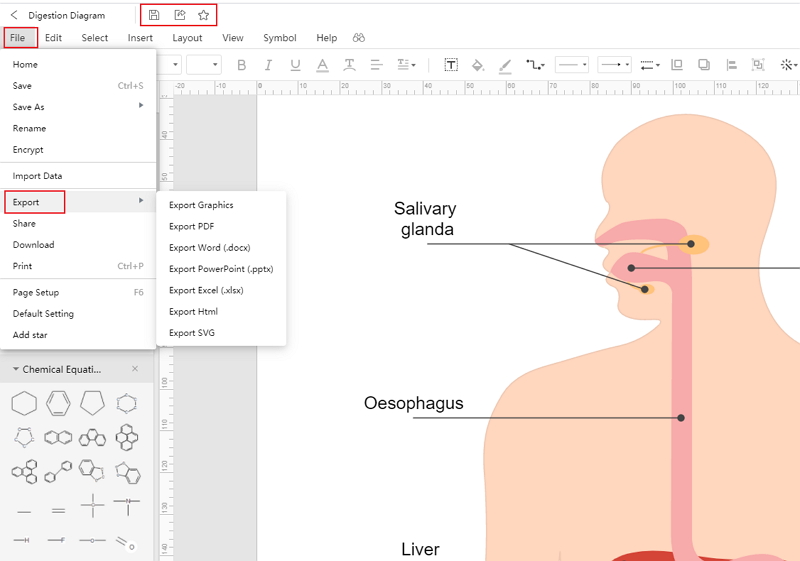 4. The Importance of Human Digestion

The human body cannot use the food a person eats. The process of digestion breaks down the food in its simplest form and then absorbs the nutrients. Through digestion, proteins break down to amino acids, fat becomes acids, and glycerol and carbohydrates turn into sugar. These nutrients are there for different functions like cell repair and growth. They provide energy for the actions of humans.

As the digestive system is one of the essential systems of the human body that helps in getting strength for necessary body functions, an individual must try to keep their digestion system healthy. They must eat fiber-rich food, lean meats, probiotic drinks, and drink plenty of water to maintain a healthy system. The students must learn about the digestive system to learn how to keep their system working aptly. They may use EdrawMax Online to get digestion system diagrams which can help them in better learning.