Check Out Edraw's Special Seasonal Deals - Up to 60% Off to Get Edraw Products. Join Now! >>
The Anatomy of Human Brain with Diagram
Try Online
DOWNLOAD DOWNLOAD DOWNLOAD

The Anatomy of Human Brain with Diagram

1. The Anatomy of Human Brain

The human brain contains functions of receiving and transmitting signals to various parts of the body through neurons. For most other mammals, the human brain has the same basic structure, but it is built better than any different mammalian brain.

The brain is a three-pound organ that regulates all body functions, interprets knowledge, and contains mind and soul essence. Intelligence, imagination, empathy, and memory are only a handful of the many aspects the brain regulates. The brain, within the skull, consists of the cerebrum, the cerebellum, and the brainstem. 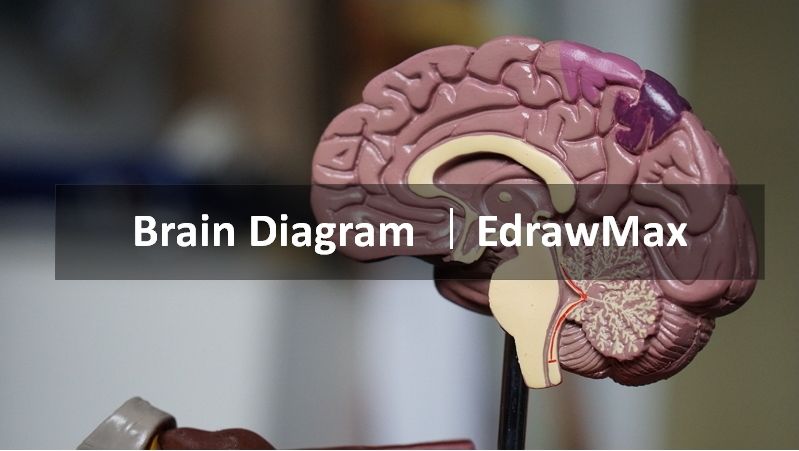 The cerebrum is the central portion of the brain, which consists of hemispheres right and left. Cerebrum performs higher functions such as reading touch, vision, hearing, thinking, reasoning, emotions, learning, and excellent movement control.

It is made up of the brain cortex and other subcortical structures. It consists of two cerebral hemispheres connected by thick, dense bands of fibers called the corpus callosum. While making a brain diagram, this will be a crucial element.

The cerebrum can be divided into four parts or lobes:

The cerebellum is the second-largest portion of the brain, found in the back of the medulla and pons. The cerebellum and the cerebrum are separated by cerebellar tentorium and transverse fissure. Cortex is the outer surface of the cerebellum and is called the foila for its parallel ridges.

Besides, it is primarily responsible for the synchronization and preservation of the body balance during voluntary activity walking, running, riding, swimming, and precision control.

The diencephalon sits at the base of the human brain. It contains:

The thalamus serves as a form of relay station for signals that come into the brain. It's also interesting in the brain, sleep, and consciousness.

The hypothalamus is the key element to offer homeostasis. It applies to the balance of all body functions.

The brain stem is situated opposite the cerebellum and is connected to the spinal cord. It is composed of three essential parts:

The midbrain helps to monitor the movement of eyes and process visual and auditory information. Also, it is the middle of the human brain. While making a brain diagram, this will be a crucial element.

Pons is the center of the brain stem. It is positioned under the midbrain. It is a group of nerves that help connect various parts of the brain. The pons also comprises some of the cranial nerves starting. Such nerves are involved in the processing of sensory input and facial gestures.

An oblongata medulla locates in the lower portion of the brain is the medulla oblongata. It functions as the heart and lungs work control center. 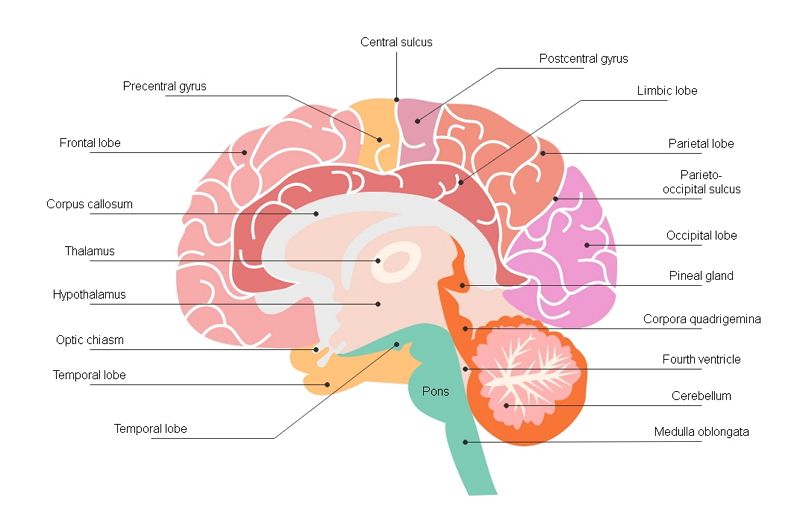 There are mainly two kinds of brain symptoms which are the brain injury symptoms and brain tumor symptoms.

The brain is one of the most critical parts of your body, so it's crucial to identify signs that there might be a problem. Symptoms of brain damage are dependent upon the form and severity of the injury. While they often manifest shortly after a traumatic incident, hours, or days later, they can sometimes turn up.

Symptoms of general brain injury may include:

3. How to Keep A Healthy Brain

Boost your mental health by regularly reading, studying, or doing thought-provoking tasks such as crossword puzzles. Both of these aids activate the nerve cells and contribute to new brain cells being created.

When playing, contact sportswear a helmet always. Make sure you buckle up before you get into the car. Both of these habits can go a long way in preventing brain injuries.

Regular fitness exercises increase blood flow in your whole body, including your brain. Try checking in on your thoughts or emotions from time to time. Writing in a diary is a perfect way of getting into the habit. Look for any patterns of thinking or emotions that tend to affect your daily life and might affect your mental health.

EdrawMax is a brilliant full-featured application commonly adopted for making a brain diagram. Now users will create a perfect graph in moments with full impact with only a few clicks. It is extremely user friendly and offers 100% privacy when it comes to security.