The SWOT Analysis of Tesla
Create It Now

The SWOT Analysis of Tesla

Tesla Inc., founded in 2003 is named after Nikola Tesla, a famous scientist and inventor. The following SWOT analysis of Tesla will delve into its dynamic business model and innovative automotive designs.

Tesla’s energy-saving approach and luxury centric designs have made it one of the top automobile industries worldwide. Martin Eberhard and Marc Tarpenning, the initial founders of Tesla Motors (former name) met with Elon Musk in February 2004, who contributed US$6.5 million of the initial US$7.5 million round of investment.

Tesla revolutionized the automobile industry by its clean energy model and created a huge global impact. Tesla’s first vehicle, the Roadster became the first automobile to use lithium battery cells.

Headquartered in California, United States, Tesla has gained popularity among the American public as a premium electric car model with an innovative design.

The SWOT analysis of Tesla will provide a deeper understanding of its working model and future projections.

2003: The company was founded by Martin Eberhard and Marc Tarpenning.

2006: Tesla made a deal with Toyota. Both companies joined hands to source drivetrains from the RAV4 EV crossover SUV.

2008: The Original Roadster debuted into the automobile industry. This vehicle revolutionised the perception of an electric vehicle.

2012: The Model S launched into the market being the first clean sheet designed vehicle to. It proved that Tesla can not only do fast but also create a luxury Sedan.

2019: The launch of Model Y, a compact crossover and The Cybertruck, Tesla’s energy-saving version of a pickup truck.

SWOT is the acronym for Strengths, Weaknesses, Opportunities and Threats. These are the internal and external factors which help understand the strategy of any business. It helps in identifying potential threats and creating a model for the company’s resources to be utilised effectively.

A SWOT analysis of Tesla will help determine the current positioning of the company and evaluate its potential business predictions and future plans. It is also a brilliant business case study as Tesla is a prominent factor in many business classes.

These are the qualities of the company that helps it accomplish the organisation’s mission. For example huge financial resources, employee competency, brand loyalty, products and services, etc.

These qualities prevent the organisation from accomplishing its goals. Examples of weaknesses can be poor decisions making, lack of USP, insufficient research, etc. Weakness should be eliminated.

These are created in the environment in which the company operates. For example, opportunities can arise from market, industry, government, consumer etc. 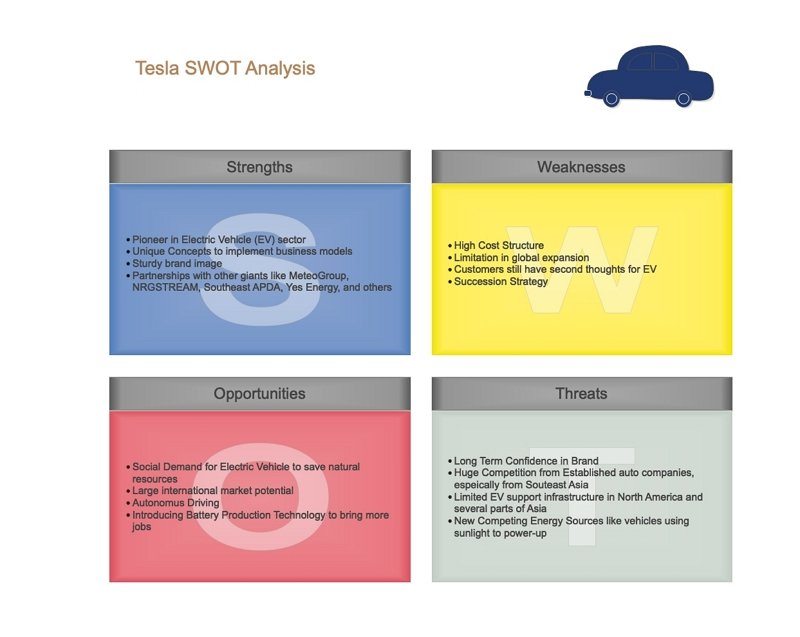 Tesla is an established pioneer in sustainability and innovation. In the SWOT analysis, Tesla has the strengths to remain successful. There are certain challenges the company is likely to face. In terms of expansion in Asia and other parts of the world. Tesla needs to re-evaluate strategies and focus on gaining popularity globally. Based on SWOT analysis, Tesla needs to -