The Anatomy of Human Eye with Diagram

1. The Anatomy of Human Eye

The human eye consists of many muscles and tissues that join to form an approximately spherical structure. It's primarily responsible for vision, color recognition, and the regulation of the human body's biological clock. 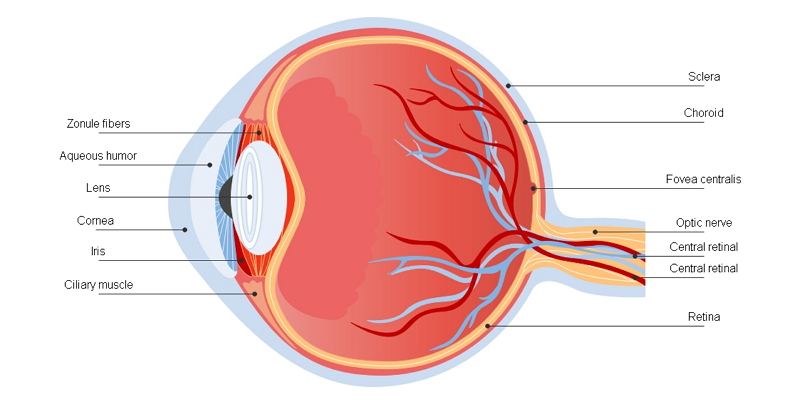 1.1 Conjunctiva of the Eye

The conjunctiva is a thin, translucent layer of tissue that protects the front of the eyes, including the sclera and the eyelids inner surface. Bacteria and foreign substances are stopped from going behind the eye by the conjunctiva.

The conjunctiva 's prime functions are:

The sclera is the eyeball 's thick connective tissue, which forms the eye's "white." The stroma layer of the cornea is continuous. The intersection of white sclera with the transparent cornea is called the limbus.

The sclera is the thick connective tissue of the eyeball, which forms the "white" eye. Furthermore, the sclera ranges in thickness from about 0.3 mm to 1.0 mm. It is made up of collagen (small fibers), arranged in irregular bundles and interlacing. The functions of Sclera:

The cornea is the transparent front of the eye. It allows the light to enter the eyes, and it lies directly in front of the iris and the Pupil. When seen from the front of the eye, the cornea appears slightly broader than it is tall. That is because the sclera somewhat overlaps the top and bottom of the anterior cornea.

The iris, the colored portion of the eye, regulates the amount of light entering the eye. The iris is a ring-shaped tissue with a central aperture, called the Pupil.

Iris consists of Ciliary body and Choroid. As for the Ciliary body, it covers the iris and is not apparent because it lies behind the opaque sclera. Yet, the Choroid is sandwiched between the eyeball 's rough outer sclera and the retina at the back of the eye.

Besides giving the eye its hue, the iris functions like a camera's diaphragm, which controls the Pupil's size. One muscle inside the iris constricts the Pupil in bright light, for example, full sunlight, and another iris muscle dilates the Pupil in dim lighting and darkness.

The pupil is in the middle of the iris opening. The pupil's purpose is to allow light to reach the eye so that it can concentrate on the retina to start the sight process.

The retina is the sensory membrane, which forms the eyeball's inner surface. It is composed of many layers, including one that includes specialized cells known as photoreceptors. In the human eye, there are two types of photoreceptor cells, rods and cones.

A bundle of over 1 million nerve fibers, the optic nerve is responsible for the transmission of nerve impulses from the eye to the brain. Those nerve signals contain brain processing information. The optic nerve's front part, visible on the retina, is called the optic disk, or optic nerve head.

2. Facts about The Human Eye

As the window of the heart, eyes contains some facts that people had few noticed. 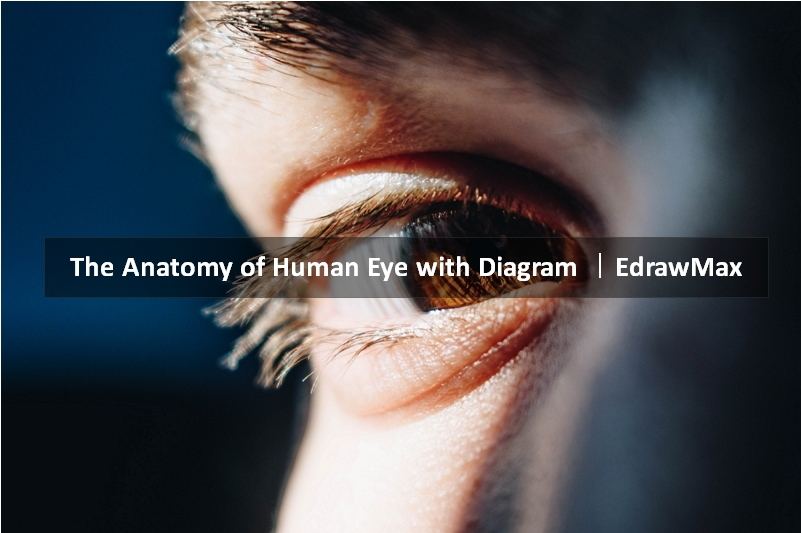 The human eye enables vision as a conscious sense organ; the rod and cone cells of the retina allow for conscious perception and vision of light, including color distinction and depth perception. The human eye can discern nearly 10 million colors.

EdrawMax is a wondrous full-featured application commonly adopted for making the human eye diagram. Now users will create a perfect graph in moments with full impact with only a few clicks. It is extremely user friendly and offers 100% privacy when it comes to security.